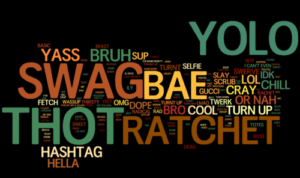 The protagonist of the story in question—Moan—was a blue-collar working man, not well-educated… And had not slept for two weeks because his just-purchased house was haunted by a noisy ghost. Since he was being tormented by this spirit and going off the rails with sleep deprivation, he would likely be unconcerned by proper diction, even at the best of times.

Those of you who have read my short stories both on my blog, and in the collection “13”, on Kindle Unlimited, have likely noted that the voice of my characters vary wildly, depending on who they are. And herein lies (not lays) the crux of this blog entry: being true to voice.

Most of us fiction writers hear voices in our heads (No, no we don’t—just you, Dave), and do our best to get not just those ethereal words down on the screen, but to capture some essence of the character’s actual nuance of speech.

In my first posted short story—Trappings—the character speaks very down-home Southern, and the text reflects this—misspellings, tortured syntax, and all. This sort of thing is vitally important to me—not misspelling words, or having a character say “Y’all” a lot, but to transmit to a reader the underlying essence of who that character is. I have played with typing out phonetically a character’s words: “Y’all gonna git yaselves in trubble”, for example, if the voice I hear—and see—in my head says that’s the way he talks. If I feel it is of vital importance that the reader be able to see this character only by his words.

One of my favorite authors, Joe R. Lansdale, breaks many of the rules of grammar, and yet his characters leap off the page because he is true to their voice (read the “Hap and Leonard” series. You’re welcome.). These East Texas boys don’t speak like they went to Columbia University; they talk like East Texas boys: “He in trouble, he don’t get himself straight.” Not, “He’s in trouble if he does not get himself straight.” The first line evokes a picture. The second puts me to sleep.

Every author deals with their characters’ voices in his or her own way. Stephen King’s occasional technique is to type something like, “Hey, you, get over here”, and at the end of the line might say, He pronounced it ovah heah. So the reader gets the essence of the character’s voice, without the constant grammatical or phonetic word hash.

Not to mention proofreading: It’s one thing to have your character say “gonna” and “git” and “fuckin” in a short story, but if you do it for an entire novel, you’d better be a darn good copy editor, or that shit will jump out at sharp-eyed readers if you forget and type “going to” and “get” and “fucking”.

So to be true to your characters’ voices sometimes you have to type “lay”, when you know “lie” would make Strunk and White happy.

In the Time It Takes to Blink: (A Novel of Suspense and Horror)

13: A Baker’s Dozen of Suspense and Horror Tales

For Weeds Will Grow: (A Novel of Horror)

IN THE TIME IT TAKES TO BLINK (Bruno Salvanian #1)

What Readers Are Saying